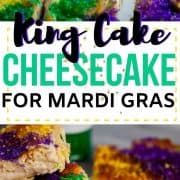 New Orleans is well known for Mardi Gras, but many don't know that the regional dish popular during the Carnival period is a decadent King Cake. Also known as the Three Kings Cake, it's a wonderful, three-layered cake with a cream cheese and cinnamon-sugar filling. Traditional recipes are topped with purple, green and gold colored sugar. This King Cake Cheesecake is made simple with Pillsbury crescent dough and comes together quick and easy! Perfect for a last minute addition for your Mardi Gras party.

Find out about new recipes before anyone else! Wouldn't you love to have these Brownie Cookie Bars dropping into your inbox?

If you've never been to New Orleans around Mardi Gras, you may be wondering what King Cake actually tastes like! You can typically get a filled or an unfilled cake. Unfilled is basically a giant flaky cinnamon roll. Filled is when they stuff that cinnamon roll with cream cheese, apples, or berries. My personal favorite is cream cheese, which is basically a cinnamon roll cheesecake!  This version is perfect if you are craving a King Cake, but don't want to have one shipped to you. You can quickly throw this together and bring it to a party or eat it all yourself.

This recipe is so simple and the best tip is that you want a really good dish. This recipe calls for an oven safe 9x12 pan and I love this Wilton pan because not only does it have a lid which is perfect for parties, but it is glass so you can use it for many recipes. Many a casserole has been baked in mine. The glass also lets you see how the bottom of the cake is doing. You don't want a perfectly flaky top with a still raw bottom!

Even if you don't have a glass pan, you can still avoid raw bottoms by baking this dessert on a low rack in the oven. If you put it too high then the top will cook long before the bottom. Of course, this will vary oven by oven so your mileage may vary. I have a very old apartment oven so this was key for my King Cake cheesecake coming out like I'd hoped! Make sure that you prep it with an oil spray so that you can easily lift the cheesecake bars out.

To make it even easier to whip together the center use a stand mixer or your handheld mixer. I've had this handheld mixer for years and I love how easy it is to change the speed settings. Plus the different attachments make it something you will want to use all the time!

Now if you want to go REALLY traditional, get a tiny baby to stick it in the cake. Tradition says that if you get the baby then it's your job to bring the king cake to the next party! I love these plastic babies because they have all skin type options so no one feels left out.

The most popular King Cake flavors are old school traditional which is just cinnamon and sugar, cream cheese, and then there are ones with filling. Depending on the store I've seen so many different flavors! If you want it to be more traditional, then use puff pasty and layer butter cinnamon and sugar in between the two layers.

If you want to go the berry route then I recommend strawberry cream cheese! To try this version, leave out the cinnamon from the mixture and just sprinkle it on top. Then layer strawberries or strawberry jam on top of the cream cheese and place the second layer of dough on top. Try it with different berries so that you love your Mardi Gras Cheesecake!

You can even mix up the topping by doing a simple glaze. A tablespoon of milk with a ½ cup of powdered sugar whisked together would make an excellent topping. Just make sure that your cake is done baking and cooled or the glaze will run right off.

Top Tips on the Topping

Typically for cheesecake bars you would mix the cinnamon and sugar together for the topping. In this Pillsbury recipe , you can see the step by steps for the process with this variation. The top looks incredible as the butter and sugar caramelize to form a crunchy crust. For my King Cake version, I knew that it was going to be covered up by the large amount of sprinkles, so I put the cinnamon in the cream cheese. I liked the depth of flavor in the cream cheese with sugary topping. You can put the cinnamon wherever you'd like it or leave it out altogether if you don't like it!

When I made this King Cake Cheesecake, I knew I was going to have to be mindful of the sprinkle situation. When cut into bars, if they hadn't adhered to the pastry, then the sprinkles would go everywhere when I cut it! I was afraid baking the sprinkles would affect this. The best way I found around this is to brush the topping with butter again to make it sticky and then add the sprinkles. I worked in sections for each color, packing on maximum sprinkles to get that true King Cake color scheme. I just love how beautiful they came out! This would also be perfect with green and red for Christmas.

How do they get the baby in the cake?

If you bought a baby to place inside of your King Cake, then you'll want to randomly place it in the cream cheese layer. Try not to place it on a line that you will cut through as you want it to be a surprise who gets it!

What does it mean when you get the baby in the cake?

You have luck and prosperity for the next year! And lucky you, you're responsible for bringing the cake to the party next year.

Do I have to use a cream cheese filling?

Of course not! If you don't want a filling at all, use puff pastry and sprinkle butter and cinnamon sugar in between the two layers. You can also top the cream cheese with berries (I love strawberries).

If you know what it means to miss New Orleans, I would love to hear about it! Rate this recipe below and tell me what you did and what you think. I'd also love to see your beautiful creations! Tag me on instagram and show off your colorful dessert! I hope you live your zest life with this one. 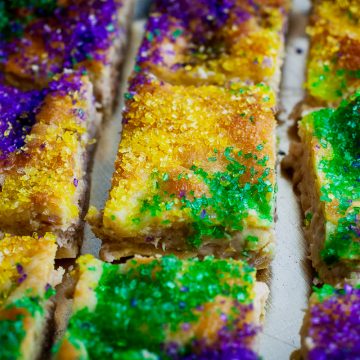 New Orleans is well known for Mardi Gras, but many don't know that the regional dish popular during the Carnival period is a decadent King Cake. Also known as the Three Kings Cake, it's a wonderful, three-layered cake with a cream cheese and cinnamon-sugar. This version is made quick and easy with crescent dough and cream cheese filling.
5 from 5 votes
Print Recipe Pin Recipe
Prevent your screen from going dark
Prep Time 10 mins
Cook Time 25 mins
Course Dessert
Cuisine American, Mexican
Servings 1 9x12 pan
Calories 4937 kcal

Bake on the bottom rack in the oven so that the bottom cooks fully.  Make sure you use the butter on top to help the sprinkles stick. Substitutions and alternative flavors in the post!  *Note that the nutrition facts are for one entire pan.